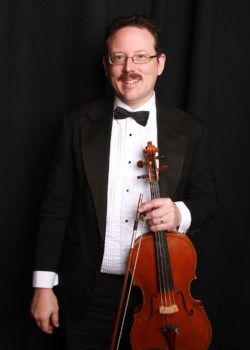 Peter Calhoun is the Principal Violist with the Muscatine Symphony Orchestra.  He had performed from time to time with the orchestra for a number of years, until two years ago when he became a regular principal player.

He enjoys the music of J.S. Bach and Johannes Brahms.  “I never can tire of Bach but Brahms’ chamber music is as good as it gets.”

His most memorable symphony performance was when the orchestra performed “Mozart’s Magnificent Voyage” with members of Classical Kids Live!  It was the perfect concert for his three daughter’s to attend and “they really enjoyed the performance.” 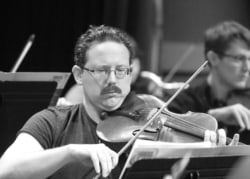 Peter is not the only Calhoun who performs in the Symphony.  His two brothers, Dana and Andrew, also perform in the Muscatine Symphony!