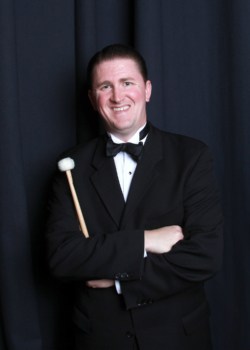 Josh Duffee has been the principal timpanist and percussion section leader for the Muscatine Symphony Orchestra for many years.  He has also been the “go-to” musician for anything on drum set.

What is your earliest musical memory?

“My earliest music memory or experience would have to be when I started taking piano lessons in 1987.  I was in the 2nd grade, and my parents wanted to enroll me in piano lessons since I kept asking them if I could learn to play the piano.  Jeff Martin was my piano instructor, and we have been performing together in the First Baptist Church Praise Band together since 2004 (he’s on piano and I’m on the drumset).  It’s fun we still get to perform music together!”

With all of your various performances with the MSO, what would be the most memorable?

“​Wow, this is a hard one to answer!  There have been so many memorable moments with the MSO.  A few for me would have to be my first performance with the MSO in 2007; Performing music for the film “The Immigrant” for Charlie Chaplin at the Symphony with Dan Kamin; The Delicious Combination concerts of Frank Sinatra and Benny Goodman.  I could list more, but hopefully these look good to you!  Oh, the first concert in 2007 was for “Muscatine! The Musical.” “