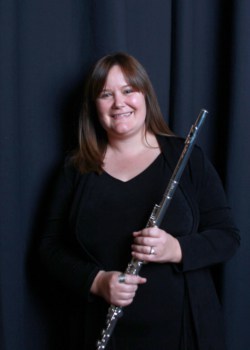 Crystal Duffee has been performing with the Muscatine Symphony Orchestra since 2009.  Through these years she has performed on principal flute as well as frequently covering the piccolo part.

What is your earliest musical memory?

“My earliest musical memory – actually my  very earliest memory EVER (in life) was me and my 2 brothers waking my parents up on Christmas morning by singing “We Wish you a Merry Christmas.” I was 3. ”

“Another memory that stands out was the first time I ever stayed home alone (5th or 6th grade). I had checked out a recording of the “New World Symphony” from the library because we were playing a version of the Largo theme in beginning band. I had never heard it before. Of course it starts out super soft, so I cranked the volume. When the timpani makes that first loud entrance in the first movement, it startled me so much that I screamed out loud, ha ha. It is still a vivid memory. Incidentally, that was the first time of MANY times playing that recording, over and over. It is a beloved piece to me now.”

Who is your favorite composer/style?

“Well, no surprise – I would say Dvorak, but also Beethoven, and Frederick Kuhlau who wrote a lot of flute chamber music. I also like almost all Russian composers. ”

Over these many years, what is your most memorable performance with the MSO?

“Most memorable MSO performance? Gosh, there are so many! Some of the ones that stick out are the special guests we’ve had, like comedian Dan Kamin, vocalist Steve March-Torme, and the Josh Duffee ensembles. “